The village of Keadue situated on the shores of Lough Meelagh and beside the Arigna Mountains, won Ireland’s Tidiest Village award and the overall National Award in the Tidy Towns Competition in 1993 and 2003 and also won a silver medal in the European Entente Florale Competition. In 2004 Keadue won Ireland’s 32 Counties best-kept town award.

Keadue two times winner of Irelands Tidiest Town in 1993/2003 and overall winner of 32 counties best kept town in 2004 has scooped  the Best Kept Village Award in this years competition.The presentation of Awards to Ireland's best kept towns was made by Minister for Rural Economic Development Ann Phelan in Farmleigh House Phoenix Park Dublin . Keadue was among thirteen towns/villages selected out of a total of 750 from North and South of the country to go forward for this competition. 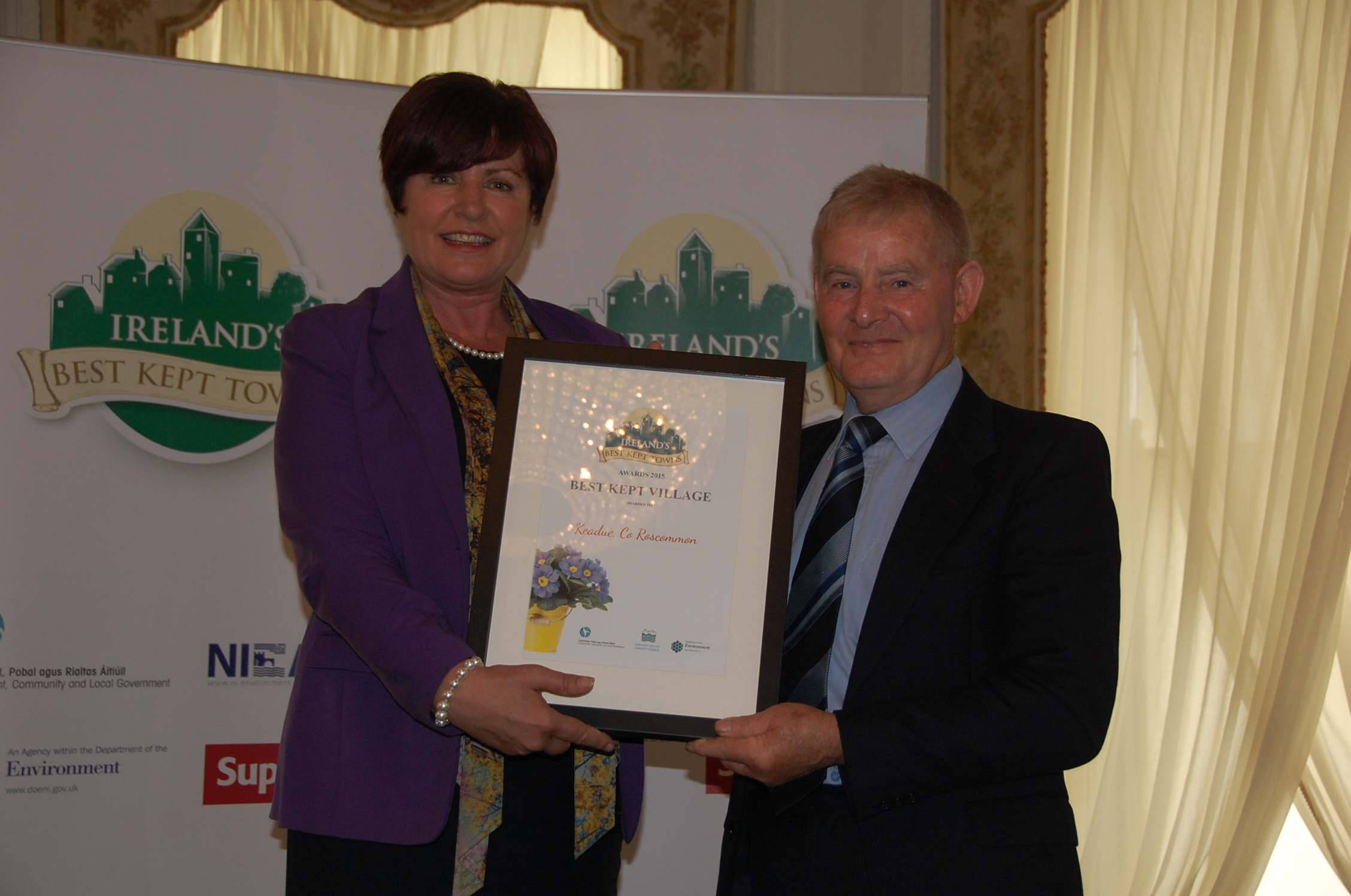 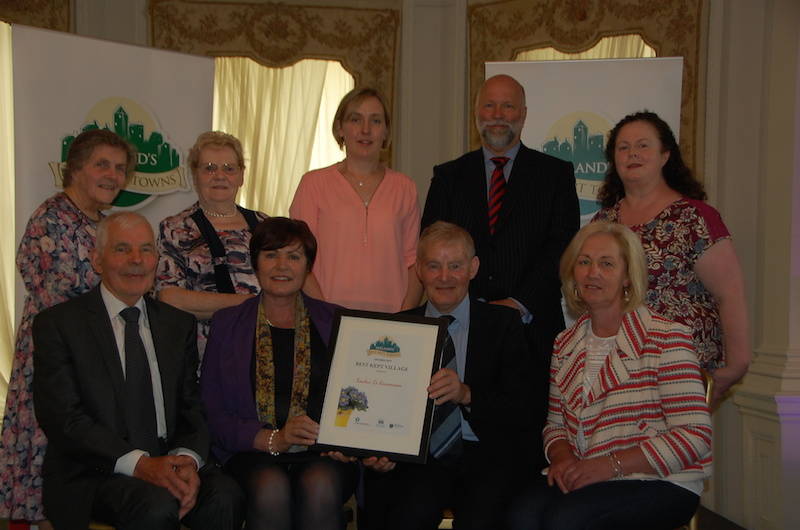 The story of Keadue’s success is quite amazing.

The motivation for Keadue Tidy Towns commenced in 1976 when Bord Failte held a seminar for local organisations in Carrick on Shannon. During the seminar, various towns and villages were shown a film, which highlighted the positive and negative features of each place.  Keadue village appeared in the film with a sizeable amount of negative features. This hurt the Keadue Community. To be ranked as a very untidy village was bad enough but to be used as an example in this context on an information evening was really upsetting.

However, rather than be deterred the committee increased their resolve to move off the bottom of the towns league table.  A list of requests, concerning work that the committee felt had become neglected over the years, was sent to Roscommon County Council. By asking so much of the County Council and by seeking to have all this work done at once was a mistake. “Rome wasn’t built in a day”. It was decided that a long-term approach was needed. Meetings with County Council engineers were arranged and this led to a very good relationship with the County Council which has been in evidence ever since.

A loan of £3500 from the Credit Union was used to carry out levelling works on the verges of the approach roads to the villages and to build stone walls. This, with a massive input of voluntary labour by the community, enabled Keadue to win the Roscommon County title in 1987 for the first time.  Keadue went on to win the regional award in 1990.

The next aim was to win the national award and in order to do this the committee felt that a town plan had to be drawn up. At a cost of £600 a professional town planner did this. Undergrounding of cables was recommended. This involved Roscommon County Council, Eircom, ESB, FÁS, and the Tidy Towns Committee.

There was an area of ground, which lay derelict in the centre of the village. It was overgrown with rushes, briars and nettles and was often used as a dumping ground.

Roscommon County Council purchased the field on behalf of the community and with grant-aid from Arigna Leader and the Ireland Fund the Tidy Towns Committee developed the ground into a Heritage Park in memory of the great Harper Turlough O’ Carolan. On the 3rd August 1993 the O’Carolan Heritage Park was officially opened by His Eminence the late Cardinal Cathal B. Daly.

On the 13th September 1993, Keadue made history by bringing the National Award across the Shannon into the west of Ireland for the first time since the start of the Tidy Towns Competition in 1952. Most people would be happy with winning the National Tidy Towns Award but further village enhancement projects such as litter control, the establishment of a wildlife sanctuary at Lough Meelagh, the discovery and maintenance of archaeological sites in the area and the opening of the Miners Way Historical Trail meant that Keadue maintained a high standard of excellence.

In 2003, Keadue won The County Award, The Regional Award, The Village Award, Gold Medal Award and the overall award of Ireland’s Tidiest Town. It was also nominated to represent Ireland in the village category of the prestigious European Entente Florale competition. The Mayor of Roscommon John Connor and Bernard Murray, Engineer of Roscommon County Council accompanied Paraic and Kathleen Noone from Keadue on a trip to Slovenia where Keadue was awarded a silver medal.

Keadue continues to maintain a high standard in the Tidy Towns Competition, replacing overgrown shrubs, carrying out landscaping projects and progressing with further developments at Lough Meelagh including a Pier and Slipway for fishing boats and small pleasure cruises.

Since the opening of Klronan Castle Hotel, Keadue is experiencing a large increase in visitor numbers, especially wedding guests who stay in the local B&Bs and visit the pubs and businesses in the area.

The Heritage Park is used as a venue by many photographers following wedding ceremonies in the newly renovated Keadue Church. Altogether, Keadue has won 5 gold medals and 5 silver medals and the Regional Award on occasions in the Tidy Towns competition.

The effort put in by so many people on a voluntary basis over the years, the willingness of property owners in the village to share a common goal, receiving funding from Leader and the great working relationship with the Council Personnel are but some of the components that leads to the success story of Keadue’s involvement in the Tidy Towns.

Keadue Tidy Towns Committee constructed a community composter which is available to the residents to bring their green waste for composting. Waste which has been collected over the past years has now developed into compost. Keadue Tidy Towns is now using the compost for allotments, flower beds, window flower boxes. Compost is also available to residents.